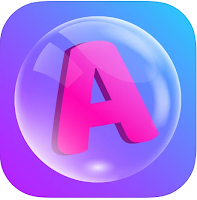 My daughters recently became very interested in a PBS Kids show called Word World. In each episode of the show the characters build a new word. As I was watching Word World with them this morning I was reminded of a fun augmented reality app called Catchy Words AR.

Catchy Words AR is an augmented reality app that provides a fun and active way for students to practice their spelling skills. The app is available for iPad/ iPhone and it is available in an Android version. The app works the same way in both versions.

In Catchy Words AR students will see letters "floating" on the screen. Students have to catch the letters by moving their tablets or phones. The movement often requires students to get up and move out of their seats. When they catch a letter students then have to bring it back to place it into one of a sequence of floating boxes. The object is to spell a word by catching the letters and putting them into the boxes. Take a look at my screenshot below to see how a completed word appears on a phone or tablet screen (please excuse my messy desk in the background).

Applications for Education
Catchy Words AR can be a fun way for some students to practice their spelling skills while getting up and out of their seats. The app doesn't require any kind of registration or login which makes it good for classrooms in which students share iPads. The shortcoming of Catchy Words AR is that you can't assign a word list to your students nor can you see which words they've spelled unless you look at their tablets or phones while they're using the app.

More augmented reality and virtual reality apps and their classroom applications will be featured as part of the Practical Ed Tech Virtual Summer Camp. Get an early bird discount when you register in the next ten days.

This post originally appeared on FreeTech4Teachers.com. If you see it elsewhere, it has been used without permission. Sites that steal my (Richard Byrne's) work include CloudComputin and TodayHeadline. Feature screenshot captured by Richard Byrne.